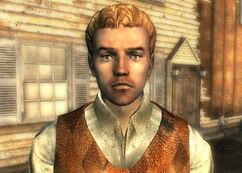 “Family first! And any man who says anything different is saying something wrong. And you should hit that man. With a stick.”

Willy "Bill" Wilson is one of seven residents living in Andale, along with his wife Martha and daughter Jenny in the year 2277.

Bill and Martha live next door to the Smiths, and they're delighted that their daughter Jenny and Junior Smith get along so well. Bill spends most days in the shed or Smith house basement working with Jack on the "family business." They all agree that Andale is the place to be![2]

Alongside Jack Smith, his neighbor (and brother) right across the street, Bill works in the "family business," preying on unsuspecting travelers to be killed and prepared as meals for the local families in secret acts of cannibalism. The traditional way of life in Andale, this practice was adopted over two centuries ago by Bill's ancestors and is how he and his modern relatives survive in the wasteland.

Along with the two Andale children, Bill is the only Andale resident who leaves his house, spending much of his time in front of the shed behind the Wilson house.

Our Little Secret: Like all residents of Andale, Bill Wilson is a cannibal. Should the Lone Wanderer uncover their secret, they can choose to let them continue their slaughter of wasteland inhabitants or kill them all.

Bill Wilson appears only in Fallout 3.

Retrieved from "https://fallout.fandom.com/wiki/Bill_Wilson?oldid=3331832"
Community content is available under CC-BY-SA unless otherwise noted.