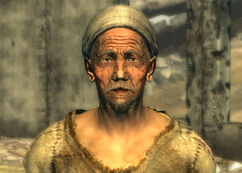 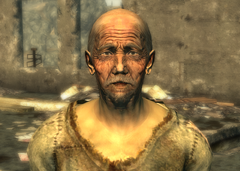 Bill without his head wrap

“Here you go you stupid cow. Don't eat it all at once.”

Bill Seward is a runaway slave in the Temple of the Union in 2277.

Bill is 54 years old and has been a slave for most of his life. His decision to escape from his master came after accidentally killing their daughter. Within hours of the incident, Hannibal Hamlin found him, which saved Bill from being recaptured or falling prey to the wasteland's dangers.

Bill has little combat skills and has no military training. He's been relegated to cooking and cleaning due to this fact, although his culinary skills are awful at best. His other principal job is to take care of the brahmin and the dog, Four Score. Bill has spent his whole life afraid and subservient and although he is free now, those habits are hard to break.[2]

* Only after completing Head of State, and siding with the slaves.

Bill Seward appears only in Fallout 3.

The character is a reference to William H. Seward, who served as Secretary of State from 1861 to 1869 under Presidents Abraham Lincoln and Andrew Johnson.

Retrieved from "https://fallout.fandom.com/wiki/Bill_Seward?oldid=3278939"
Community content is available under CC-BY-SA unless otherwise noted.