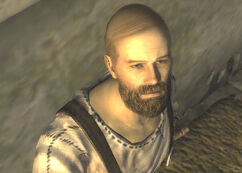 Bill Ronte is an engineer turned drunkard living in Freeside in 2281.

Old Bill Ronte is a skilled machinist who installed and maintained a water pump in Freeside before becoming addicted to Dixon's whiskey.

High Times - Detoxing: there are three options for helping Bill get sober during the quest, once Dixon is no longer supplying him with booze:

When the player character talks to him, his response will be: "..." [verified]

Retrieved from "https://fallout.fandom.com/wiki/Bill_Ronte?oldid=3257984"
Community content is available under CC-BY-SA unless otherwise noted.