CaucasianOld
“Bet the Commies in China wish they had it as good as we do, eh?”

Bill Foster[1] is one of the inhabitants of Vault 112 and part of the Tranquility Lane virtual reality simulation, still alive in 2277.

Mr. Foster is a technician down at the local RobCo plant and wears a jumpsuit bearing the company name.[Non-canon 1] When the Lone Wanderer first arrives, he will tell them to go speak to another child, Betty who is over on the playground.[2] While walking around the area, he will comment that it is a nice day and that he loves to live in the area.[3]

Like the other inhabitants of Vault 112, he is trapped in the Tranquility Lane simulation by Stanislaus Braun. If he is viewed in the vault pod before entering oneself, his vital signs are as followed:

He is the only Tranquility Lane resident besides Betty, who does not have a house bearing his surname.

Bill Foster appears only in Fallout 3. 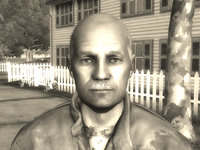 Bill Foster without his glasses and cap