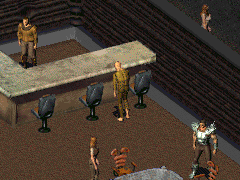 “What kind of an asshole question is that?”

Bill is a withered man with bushy white eyebrows, who looks like he's in perpetual need of a drink.[1] When approached, he seems to be starring intently at the wall behind the bar. He does not interact with the Chosen One beyond gesturing him to go away, or questioning the reason for asking if he has killed anyone and then telling the Chosen One to 'back-up'.

Bill appears only in Fallout 2.

Retrieved from "https://fallout.fandom.com/wiki/Bill_(New_Reno)?oldid=3072965"
Community content is available under CC-BY-SA unless otherwise noted.