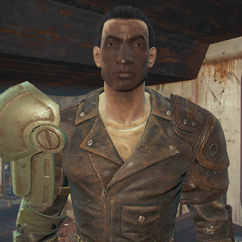 Bilge is a trapper leader on the Island in 2287.

Bilge is the leader of a group of trappers that have set up camp in and around the MS Azalea. Wearing a set of raider power armor, Bilge is the only power-armored enemy on the entire island.

Bilge appears only in the Fallout 4 add-on Far Harbor.

Bilge wearing a raider armor
Add a photo to this gallery
Retrieved from "https://fallout.fandom.com/wiki/Bilge?oldid=3265479"
Community content is available under CC-BY-SA unless otherwise noted.