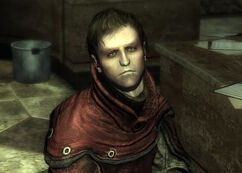 “We do what we can. Take, for example, this ghoul Griffon. He wanted to PURCHASE a bunch of water. What the hell does that droopy irradiated fool need with pure water? Thinks he can sell it in Underworld. Moron. But, he's the only one who's offered to PAY for water, in caps AND technology. And what Lyons doesn't know won't hurt him. There's plenty of water to go around. And I can use it to pay Rivet City to provide security for all the caravans we can't escort ourselves. I'm lucky he came along.”

Scribe Bigsley is a Brotherhood of Steel scribe, deployed as part of the military contingent stationed at the Jefferson Memorial, operating as the administrator of Project Purity's operations after the retaking of the water purifier in 2277.

This overworked, underpaid, and unappreciated Brotherhood scribe is the administrator of the water distribution project. He hasn't slept since the water purifier started working. Lyons wants water to go everywhere; the rest of the Brotherhood resents being sent on deliveries. Bigsley is caught in the middle. He agrees with those who feel they should charge for the water, to let the free market set up the distribution network, but he will follow orders as best he can. He's worked out a deal with Rivet City to use their security force supplement the Brotherhood escorts of the water caravans and hopes to soon hand over the entire distribution nightmare to Rivet City, but they seem reluctant and are having trouble with bandits. There is literally a line of acolytes outside his door with various questions, reports, armfuls of paperwork, and requests regarding the water distribution. Bigsley is on the verge of a nervous breakdown.[1]

Talking to him reveals that he was kicked out of all three orders, after (he claims) the lead scribe of each order felt threatened by his ability and intellect. For example, his modified laser rifles resulted in the wounding of some initiates (due to the initiates' inability to handle the extra power output, at least according to Bigsley). After being transferred to the Order of the Shield, he antagonized Scribe Bowditch by calling the latter's theories "outdated." He was then transferred to the Order of the Quill, where he quickly ran afoul with Scribe Jameson (who previously condemned Scribe Yearling to a life-threatening assignment at the Arlington Library for similar reasons).

Bigsley, like many others, questions Elder Lyons. In the end, he even felt that he had lost the support of Scribe Rothchild, who transferred him to the purifier project, an assignment Bigsley feels is akin to exile.

Scribe Bigsley appears only in the Fallout 3 add-on Broken Steel.

Bigsley, frustrated, works as scribes bring more reports to his desk.
Add an image to this gallery

Retrieved from "https://fallout.fandom.com/wiki/Bigsley?oldid=3326543"
Community content is available under CC-BY-SA unless otherwise noted.