Bighorners of the Eastern Virgin 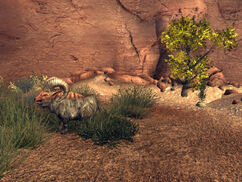 Decide what to do with the bighorner calf

“My guess is one of the calves got lost somewhere along the way. Bighorners are communal - one missing calf and the whole herd gets ornery.”— Follows-Chalk

Bighorners of the Eastern Virgin is a side quest in the Fallout: New Vegas add-on Honest Hearts.

Talking to Follows-Chalk about interesting wildlife in Zion will initiate this quest. Once it is received, head to Angel cave and go up the slope to the east of the camp. After maneuvering across the river over the three rock bridges, the Courier will find the Lost Mountain bighorner calf at the end of a narrow passage opposite the end of the last bridge.

In order to complete the optional part of the quest, the Courier mustn't get too close to any of the other bighorners, otherwise they will attack.

The Courier has to then to feed the lost calf a banana yucca fruit to get it to follow them. It is a good idea for the Courier to have three or four banana yucca fruits (there are 3 banana yucca plants along the route) as the calf periodically stops, and has to be fed another before it will continue. It can take 5–10 seconds after feeding for the calf to resume again.

The Courier should then return back across the rock bridges to the bighorner mother. They must then choose to either return the calf or keep it and if the former, speak to Follows-Chalk to complete the quest and receive the reward. If any bighorners were killed by the Courier in the process of completing the quest, Follows-Chalk will still give the reward. He indicates that he understands, but wishes they had not been killed. If no bighorners are killed, the player receives 25% more XP for the quest.

Dead Horse markings on the cliffside

Dangerous cliff overpass along the way

Mama and calf rejoined
Add a photo to this gallery
Retrieved from "https://fallout.fandom.com/wiki/Bighorners_of_the_Eastern_Virgin?oldid=3224012"
Community content is available under CC-BY-SA unless otherwise noted.
... more about "Bighorners of the Eastern Virgin"
RDF feed
Has platform
PC +  and Playstation 3 +