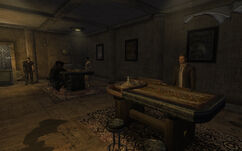 View at the playing tables and slots

Caps
Banned from gambling in the casino

To complete this quest, the Courier needs to play the games that the casino has to offer (Blackjack, Slots and Roulette) until they are banned from gambling in the casino. They can be banned by winning too many games and getting too much money from the casino. During this process, three different prizes will be received from the casino, after the Courier wins 1250, 2500 and 3750 caps. The prizes are received automatically after reaching the chip milestones.

As the Courier wins the games that the casino has to offer, they will receive the below rewards after reaching the chip amount:

After earning 5,000+ chips, the Courier will be banned from playing games in the Atomic Wrangler casino. They can still use its other functions like the bar and the services of the prostitutes (if the Wang Dang Atomic Tango quest has been completed), but cannot gamble on its tables anymore. This ban is permanent.

Retrieved from "https://fallout.fandom.com/wiki/Big_Winner,_Atomic_Wrangler?oldid=3374327"
Community content is available under CC-BY-SA unless otherwise noted.