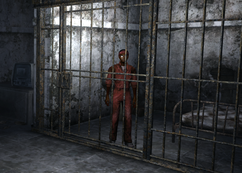 Red in her cell

“Skulk up toward German Town, near the police station. They always come from that direction.”— Dusty when asked where the Super Mutants come from

Big Trouble in Big Town is a side quest in Fallout 3. It is also an achievement on the Xbox 360 and PC; and a bronze trophy on the PlayStation 3.

Germantown police HQ has two possible entrances: the first is using the higher door on the north side. If the player character has 100 Lockpick, the lower door on the west side may also be entered and puts them very close to Red's location. If the former is chosen, some hallways of super mutants and the occasional trap need to be traversed.

Red is located in a jail cell on the ground floor. The cell door can either be picked, opened with a terminal (accessible with a holotape located upstairs) or opened with the Germantown jailors key, found on the toughest super mutant in the station. Beware, as with Broken Steel installed, the toughest super mutant in the station is an overlord armed with a tri-beam laser rifle or a Gatling laser. When spoken to, Red thanks the player character for rescuing her, granting good Karma and tells the player about her friend Shorty, in the kitchen downstairs. As an optional objective, the player character may go through the basement in order to rescue him. He will be found in the kitchen, in conversation with a super mutant who wishes to eat him. If the conversation goes on long enough (usually only 10–20 seconds), the mutant will start shooting Shorty. Saving him will provide the player character with more good Karma. Note that the type of mutant that Shorty is talking to varies depending on the player character's level, and can be anything from a regular super mutant to an overlord if Broken Steel is installed; however, it will still be labeled "super mutant" in-game.

If Red dies at any point during the quest, it will not immediately fail. The objectives will update to tell the player character to go to Big Town to explain her death. When the player character speaks with any of the residents and tells them about their friend's demise, they will give the player 200 caps, stating that the town will not be needing it anymore. The quest will fail at this point.

Once Red (and Shorty, if the player character chose to help him) have been rescued, return to Big Town and speak to Red to be thanked. One can refuse a reward for good Karma, or request one to receive 300 bottle caps. 200 more can be obtained through a speech check with accompanying bad Karma. The caps can be returned afterward to gain the Karma back.

Alternatively, the player character may not teach them anything, and either leave them to their fate, or help fight the mutants anyway. Although the residents are weak, weapons, ammunition and armor can be reverse pick-pocketed into their inventories to give them a better chance (especially if the Small Guns option was not chosen). Forcing a loading screen, such as by entering or leaving a building with an interior cell, or fast traveling from and to Big Town is required to get them to equip their new items.

The super mutants, arriving in pairs, are usually armed with anything from nail boards to miniguns, depending on the player character's level.

Shortly after preparations are made, a number of super mutants (this varies depending on the player's actions as explained below) will attack. If sneak was not chosen, the super mutants must be defeated to complete it. However, if sneak was chosen, two super mutants will enter trying to find the townspeople, and if uninterrupted, eventually leave. They then follow the road north between Hallowed Moors Cemetery and Meresti trainyard back to the Germantown police HQ.