“Yeah, we lost some guns, you little weasel. However, we can get more guns. You slowed us down but you can't stop us.”

Big Sal is a high-ranking member of the Omertas living in the Gomorrah in 2281.

Big Sal is Nero's right-hand man and is in charge of the usual day-to-day operations of the Gomorrah casino. Officially, that is all he does - run the casino and ensure a substantial and regular tribute is paid as Mr. House demands.

Less publicly, Big Sal has a deep resentment for Mr. House and his way of keeping a tight hold on the Strip while staying hidden away in the Lucky 38 casino. Driven by lust to pocket the Gomorrah casino's profits and perhaps take over the Strip themselves, Big Sal and his boss Nero have secretly forged an alliance with Caesar. Sal himself is in charge of planning the coming attack on the Strip, recruiting various locals from the New Vegas area to assist with the project; Troike supplies the family with cheap and top-quality guns, Clanden assists with the construction of a gas bomb to kill the residents of the Strip, and Cachino is in charge of logistics in preparation for the Omertas' grand plans.

How Little We Know: The player character can choose to either kill Big Sal and Nero for Cachino or kill Cachino by order of Big Sal.

Big Sal is voiced by Alex Rocco. "Big Sal" may be a nod to his most famous role as Vegas Mob boss Moe Greene in 1972's The Godfather. 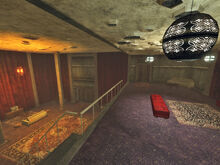