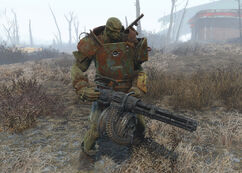 Big Mack is a super mutant living in the Wilson Atomatoys factory in 2287.

Big Mack is a super mutant in charge of a small amount of other super mutants at the Wilson Atomatoys factory.

Big Mack appears only in Fallout 4.

Big Mack is named after "Big Mack" Pryor, who met the staff at Bethesda Studios while battling relapsed leukemia at the NIH in Bethesda. He died Dec 27, 2015, aged 21.

Retrieved from "https://fallout.fandom.com/wiki/Big_Mack?oldid=3114330"
Community content is available under CC-BY-SA unless otherwise noted.