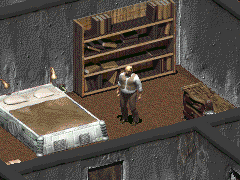 Head of the Mordino family

“The Mordino name has... weight in New Reno.”

Big Jesus Mordino is the head of the Mordino crime family in 2241.

Big Jesus Mordino and his son Lil' Jesus Mordino are the heads of the Mordino crime family in New Reno. Big Jesus is a large, sweaty man with small, beady eyes.[1] He and his son were once Reno slaves, until they managed to turn the tables in their favor and emerge as the rulers of one of the biggest crime families in the City of Sin.

The Mordino family controls all Jet production and most of its distribution and sales in New California, thanks to the "acquisition" of Big Jesus' pride and joy, the genius Myron.

An unused proto of Big Jesus exists in the game files. It uses the default leather jacket male sprite and has marginally higher SPECIAL stats, but is inferior in terms of skills and derived stats.

Retrieved from "https://fallout.fandom.com/wiki/Big_Jesus_Mordino?oldid=3364110"
Community content is available under CC-BY-SA unless otherwise noted.