"Big Iron" is a song broadcast on Radio New Vegas, Mojave Music Radio and Black Mountain Radio in Fallout: New Vegas. It was written and performed by Marty Robbins and released as a single from the 1959 album Gunfighter Ballads and Trail Songs.

In a 2019 interview with New York magazine, music supervisor Christopher S. Parker described picking the song out of many from the album.[1]

“"There were a bunch of songs off that record that could’ve potentially been used in New Vegas, but this one was definitely my favorite," Chris Parker, the music supervisor on New Vegas, told me. He first discovered Robbins while doing research for a film project set in the early ’60s that never came to fruition. “It was a perfect fit for the character, the persona, and the setting of New Vegas. There was a little bit more of a Western vibe to that game.” "I really like the backup singing in that song, and I think it’s a great hook," Parker noted. He couldn’t have foreseen that his decision to include "Big Iron" on the soundtrack would lead to more than eight years of memes.”

It was early in the morning when he rode into the town
He came riding from the south side slowly lookin' all around
"He's an outlaw, loose and running," came the whisper from each lip
"And he's here to do some business with the big iron on his hip"
Big iron on his hip

In this town there lived an outlaw by the name of Texas Red
Many men had tried to take him and that many men were dead
He was vicious and a killer, though a youth of twenty four
And the notches on his pistol numbered one and nineteen more
One and nineteen more

Now the stranger started talking, made it plain to folks around
Was an Arizona ranger, wouldn't be too long in town
He came here to take an outlaw back alive or maybe dead
And he said it didn't matter - he was after Texas Red
After Texas Red

It was over in a moment and the folks had gathered round
There before them lay the body of the outlaw on the ground
Oh he might have went on livin', but he made one fatal slip
When he tried to match the ranger with the big iron on his hip
Big iron on his hip

This song is one of four that appear on all three major radio stations, with the other three being "Heartaches by the Number," "It's a Sin to Tell a Lie" and "Johnny Guitar." 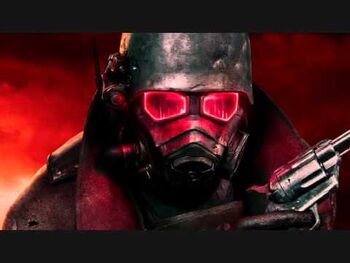 Retrieved from "https://fallout.fandom.com/wiki/Big_Iron?oldid=3135369"
Community content is available under CC-BY-SA unless otherwise noted.