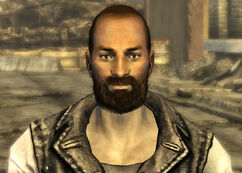 “Let me guess. You want to know my secret - how I got my beard to grow in so thick.”

Big Beard is a gun for hire found in the Atomic Wrangler casino in Freeside in 2281.

Big Beard can be hired together with Little Beard. The player character can only engage in conversation with Big Beard, as Little Beard claims that "the one with the biggest whiskers does the talking" when trying to interact with him.

Bye Bye Love: Carlitos asks the player character to recruit Big Beard and Little Beard saying that they "owe him," but will not elaborate on why. When questioned, Big Beard will only say that their debt to Carlitos has "something to do with the beards."

Add a photo to this gallery
Retrieved from "https://fallout.fandom.com/wiki/Big_Beard?oldid=3173037"
Community content is available under CC-BY-SA unless otherwise noted.