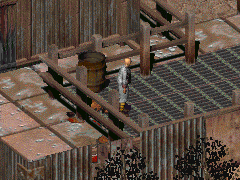 Biff is the brother of the slaughterhouse owner Grisham in Modoc and the uncle of Miria and Davin, in 2241.

Biff is a resident in Modoc, a town with an economy relying on farming. He does not appear unless his brother Grisham dies (see interactions), at which point he moves in and takes over his brother's slaughterhouse and also becomes the guardian of his niece and nephew. He is very conservative, like Grisham, and will insist on honoring his brother's wishes by marrying off his children should he catch them in bed with a stranger.

If Grisham is dead, and the Chosen One sleeps with either of his children (Miria or Davin), Uncle Biff appears to deliver the same shotgun wedding ultimatum offered by Grisham when he is alive. Killing Biff as well will not get the player character out of it - there is an infinite number of brothers, all named Biff and with shotguns and conservative ideas about premarital sex.

Biff appears only in Fallout 2.

Retrieved from "https://fallout.fandom.com/wiki/Biff?oldid=3263267"
Community content is available under CC-BY-SA unless otherwise noted.