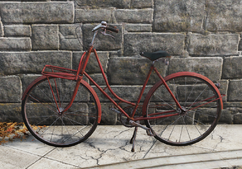 A bicycle is a world object found in Appalachia.

There are 137 complete bicycles located throughout Appalachia. Locations include:

Bicycles appear only in Fallout 76.

Add a photo to this gallery
Retrieved from "https://fallout.fandom.com/wiki/Bicycle?oldid=3420550"
Community content is available under CC-BY-SA unless otherwise noted.