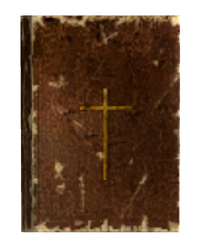 The Bible (also known as the Holy Bible) refers to a collection of books written thousands of years prior to the Great War of 2077. Few complete editions of the book are known to have survived in the wastelands. One such possible appearance, however, is seen in 2281 in the Fallout: New Vegas add-on Honest Hearts, where Joshua Graham is shown reading what appears to be a Bible when he is in the Sorrows camp after the quest Deliverer of Sorrows, and also appears as an acquirable item for the player called "Scripture". It is also known that New Canaanites use the King James Version of the Bible.[1]

However, many instances exist where remnants of the text still appear in the Fallout world. One such instance is a quote from one of these books, the Book of Revelation, is the favorite quote of Catherine, the mother of the Lone Wanderer. Sometime after her death, her husband James frames the quote in a picture frame. In 2259, James introduces his child to the quote.

Additionally, a copy of the text appears tucked into the rope belt of the Pastor's vestments which can be worn by the player in 2287. 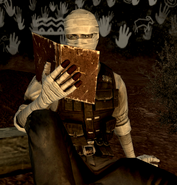 Joshua Graham seen holding the Bible in the Sorrows camp 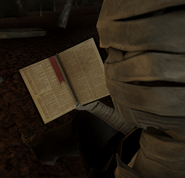 Retrieved from "https://fallout.fandom.com/wiki/Bible?oldid=3146176"
Community content is available under CC-BY-SA unless otherwise noted.