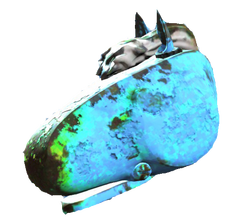 Betty Buttercup was a Giddyup Buttercup head, whom Scabby felt truly understood him. It asked Scabby to "protect her friends," which he did instead of fixing up the gang's power armor.

On October 15, the gang removed her head from Scabby's coat and kicked her around until they "smashed her to bits." Her last known act after this was to ask Scabby to seek revenge.

Betty Buttercup appears to be the head of a Giddyup Buttercup.

Betty Buttercup can be broken down into its individual components for use in crafting:

Found on Scabby in the Wilson Atomatoys Corporate HQ.

If dropped inside of or around the Red Rocket truck stop, it can cause the workshop's colors to distort when viewed from a distance. [verified]

Retrieved from "https://fallout.fandom.com/wiki/Betty_Buttercup?oldid=2959088"
Community content is available under CC-BY-SA unless otherwise noted.