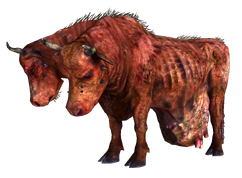 Betsy the Brahmin is a named brahmin in the Mojave Wasteland in 2281.

Betsy the Brahmin appears to be a standard water brahmin associated with the cut character Kevin Hargrove. Although she is not placed anywhere in the game, a number of resources placed in the game indicate she was somehow tied to Freeside's north gate, in particular a disabled animal pen and gate internally referenced with Betsy's name.

There are also indicators that Betsy would have served as some manner of companion, likely temporarily. An additional quest titled VDialogueBetsy (FormID 0015435e) contains two partially complete dialogue options: "Betsy, I need to go on by myself. Are you going to be okay, girl?", and "C'mon, girl. Let's get going." Both options are incomplete and lack any form of reply or script associated with it.

Betsy the Brahmin was cut from the final version of Fallout: New Vegas.

Betsy is a reference to both a Fallout 2 brahmin in Modoc that can be healed from a broken leg and becomes a temporary companion, as well as the brahmin of the same name that appeared as a multiplayer recruit in Fallout Tactics.

Retrieved from "https://fallout.fandom.com/wiki/Betsy_the_Brahmin?oldid=3202749"
Community content is available under CC-BY-SA unless otherwise noted.