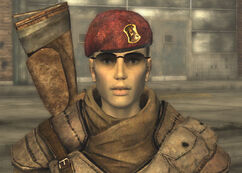 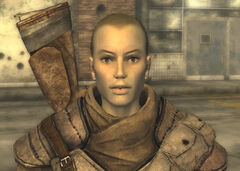 “I see some cute little number, and I'd rather get in her pants. So, maybe I'm a stone-cold bitch after all.”

Corporal Betsy is a NCR 1st Recon sharpshooter stationed at either Camp McCarran or Camp Forlorn Hope in 2281.

A presumably cantankerous person, Betsy is actually a kindhearted professional.[1][2] It is her particularly deadpan sense of humor that one would confuse the two.[3][4][5] This however is not the case. When 10 of Spades first joined the outfit the rest of the battalion didn't want to partner with him thinking that he was too inexperienced and would therefore be a liability. She however saw his potential and decided to mentor him, putting her life in his hands. This alone wasn't all she did for him though; while most of the other sharpshooters in 1st Recon wear sunglasses, 10 of Spades needed eyeglasses, so she convinced him to take them as "training aids;" truth is his eyes are just bad.[6][7]

Sometime after she volunteered to partner with 10 of Spades, the pair was ambushed by Cook-Cook's group of Fiends on one of their first assignments. After sneaking up on them, Cook-Cook kicked 10 of Spades in the head until he was unconscious, undoubtedly trying to kill him.[8] While 10 was unconscious, Betsy was raped and left for dead.[9]

Spurred by her pride, she tried to shrug off the trauma,[10] but this had profound effects on her mental wellbeing, and her slowly building anger bled into her deadpan humor.[11] With her rape trauma syndrome going untreated she became more promiscuous following the attack. It got to the point where she made passes at every woman who wandered by. Her increasingly inappropriate behavior[12][13][14] began to reflect badly upon her and 1st Recon as a whole. While her commanding officer, Lieutenant Gorobets, could order her disciplined and/or treated, he knows it would be better if she made the right choice herself.[15][16][17][18]

Looking for an excuse to save face,[16] she will cave if told of her own squadmate's problems are being worked through in the same manner,[19][20][21] by convincing her that it is like a wound that needs to be healed before festering,[22][23] or if one were to be as straight forward and harsh as a drill instructor.[24] Once agreeing to the treatment her teammates will be grateful, just as she will be if the Courier kills Cook-Cook.[25]

For the past six months, First Recon has been stationed at Camp McCarran, mostly on perimeter duty, manning the guard towers.[26][27] However, they most definitely were sent out after the Fiend leaders; Betsy even claims two confirmed hits on Driver Nephi.[28] He however managed to get away, and she holds a personal grudge against him because of it. If 1st Recon gets recruited to help go after him she will comment on who got the killshot, be it herself[29] or someone else.[30] Once the threat from the Fiends are neutralized in the western Vegas Conurbation, she – like the rest of 1st Recon – will be transferred to the front lines at Camp Forlorn Hope.

As a lesbian[31] she doesn't appreciate men,[32][33] especially the "horn-dog alpha males" that make up the bulk of the Army.[34] This however is more due to her own sense of pride, as their consistent come-ons and lack of interest in actually listening to her (or at least that is her perception of them) is a complete and total affront.[6][4]

She has complete respect for her team,[35] but it is her pride that blinds her from their respect and concern.[36] She has extreme respect for Sterling who was an NCR Ranger, although she never got into a discussion with him about his experiences being more concerned with his Ranger status, or lack thereof. Her perception of Bitter-Root was similar: an extremely tough hardened man who didn't need to talk about his problems, nor admit that someone else helped him through them. This, however, was her just projecting. As for 10 of Spades she saw potential in him, trusting her life to the newest member of the team. She respects that he doesn't try to flirt to her and listens to her when she speaks, but she doesn't appreciate his constant talking.[6][7][37] For her CO Lieutenant Gorobets she has the utmost respect.[38]

As for her love life, she is an openly promiscuous woman and prefers beautiful tall blondes,[4][39][40] although if she finds someone who enjoys her sense of humor, it's all the better.[41] Due to her profession she knows that there is no time to waste; she could be dead tomorrow, so why waste time not being forward?[42][43][44] This is the only thing she agrees with the "alpha-males."[45] She has leave coming up and booked a suite at Gomorrah.[46][47]

As an experienced soldier she knows that the Fiends are not a real threat, Caesar's Legion is. She also has a sense of justice, although she admits that all she does is "shoot the bad guys."[26] In fact she feels bad for the Fiends – particularly the females – as they are a bunch roving of junkies so crazed and drug addled that they cannot comprehend that they are in fact the problem.[5][26][48]

Betsy will flirt with a female Courier if her Charisma is 7 or greater. Possessing the Cherchez La Femme perk will allow the Courier to acknowledge her advances, though ultimately, there is no option to actually follow through with it.

Betsy was written by George Ziets.[49]

Retrieved from "https://fallout.fandom.com/wiki/Betsy_(Fallout:_New_Vegas)?oldid=3219767"
Community content is available under CC-BY-SA unless otherwise noted.