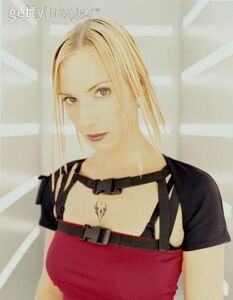 Betray Trisha was going to be a quest in Van Buren, the canceled Fallout 3 by Black Isle Studios.

Trisha is trying to convince Burk to hand the Twin Mothers over to Caesar's Legion. Betray Trisha by telling Burk she is working for the Legion.

Trisha is trying to convince Burk to hand the Twin Mothers over to Caesar's Legion. She believes that this would elevate the status of the Scorpion's Bite in their eyes and score some serious rewards in the process. However, Burk has steadfastly refused to do so. This, of course, has not discouraged Trisha. It has simply convinced her that it may be time for her to take matters into her own hands and move on. She is working for the Caesars Legion. She will be killed by Burk if you tell him that she is working for the Caesars Legion.

The player may also decide to aid Trisha in her betrayal of Burk and deliver a holodisk, with complete details of the Twin Mothers area and necessary information to take over, to the Legion.

Retrieved from "https://fallout.fandom.com/wiki/Betray_Trisha?oldid=3168773"
Community content is available under CC-BY-SA unless otherwise noted.