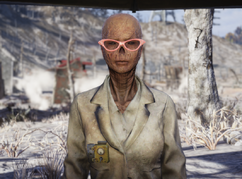 “Suddenly my specialty is critical to the continuation of the species. I hate to be thankful for the apocalypse but it's nice to be relevant.”— Bethy Mangano

Dr. Bethy Mangano is a ghoul scientist, camped in a tent behind the Clarksburg church in 2103.

Prior to the Great War, Dr. Mangano was a professor of soil sciences. When the War struck, she was exposed to massive amounts of radiation and became a ghoul, but was physically unharmed. Since then, she has devoted herself to studying the soils of toxic environments such as the Toxic Valley to determine how to reclaim them for farming.

Bethy Mangano appears only in Fallout 76, introduced in the Wastelanders update.

Retrieved from "https://fallout.fandom.com/wiki/Bethy_Mangano?oldid=3364678"
Community content is available under CC-BY-SA unless otherwise noted.