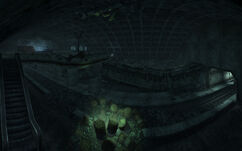 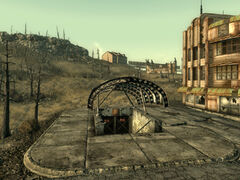 Bethesda underworks is a metro station located in the Bethesda ruins.

The main entrance is via a metro station entrance located northeast of Bethesda office east. Uncharacteristically, this station doesn't have an obelisk marking its location.

Inside the station, the mezzanine and platform are relatively intact. The subway tunnels are partially destroyed, with access being limited to the tunnel openings, and the subway tracks run north to south. Located off one of the destroyed subway tunnels is a service tunnel which leads to a sewer grating ladder. This sewer grating is located south of Bethesda offices west. This station is irradiated by barrels of radioactive waste, with the largest concentrations being located on the platform, the pile of barrels near the service tunnel, and near the sewer grating ladder.

The underworks is populated by feral ghouls, and it is not uncommon to see a glowing one or a feral ghoul reaver (if Broken Steel is installed) here amongst the other types of ghouls. Upon entering, the Lone Wanderer may be swarmed by all of the nearby ghouls at once, forcing them into a fight with around 6 ghouls of varying difficulty.

Bethesda underworks appears only in Fallout 3.

After all add-ons are installed, the ghouls in the area may completely vanish, except for one glowing one by the stairway. [verified]

Ladder to the wasteland

Sewer access to Bethesda underworks
Add an image to this gallery
Retrieved from "https://fallout.fandom.com/wiki/Bethesda_underworks?oldid=3085102"
Community content is available under CC-BY-SA unless otherwise noted.