The Bethesda ruins are located northwest of Washington, D.C. They are inhabited by raiders and ghouls, and are divided into three sections: Bethesda offices west, Bethesda offices east and Bethesda underworks.

Prior to the Great War of 2077, Bethesda was a major town in the DC area. There were metro and city liner services for this city, and north of Bethesda is an old monorail train. As the west-east highway ends in the city, another highway traveling north passes through the area. The city has a local park, named after the largest employer in this city, where baseball was regularly played.

The raiders have barricaded most of the streets leading to the ruins with crudely constructed structures and derelict vehicles. There are also some mines in a small, grassy area to the south, next to Bethesda offices east.

In between the two office buildings is a walkway connecting them with a raider carrying a sniper rifle near two ammunition boxes containing a random amount of .308 caliber rounds. Further east (roughly east by southeast) is the metro entrance to Bethesda underworks.

West of the entrance to the Bethesda offices west, at the Red Rocket gas station in the outskirts, there is a random encounter location.

Mostly reception and office space, Bethesda offices west is home to a considerable number of raiders. The cramped confines of the building render most hard-hitting long-range weapons ineffective, as they become unwieldy when turning corners and investigating small rooms.

In the reception area there are two raiders and a Mark VII automated turret in the center of the room. On the semi-circular desk next to the turret terminal lies a Big Book of Science. Upstairs there are at least three shotgun traps that are activated by the same pressure plate and aimed at the same place, as well as two grenade bouquets. The Lone Wanderer may encounter a raider with a flamer sleeping in the bed within this room.

Much of the east building is made up of small offices, with more cramped fighting conditions as a result. Extensive damage to the building also includes large gaps and holes in the floor, making fighting on the upper floor treacherous in places. In the small room with two cubicles, the Lone Wanderer can find a Chinese Army: Special Ops Training Manual laying on top of the desk in the left cubicle. There is a raider boss here, armed with a flamer and carrying a U.S. Army: 30 Handy Flamethrower Recipes skill book in their inventory, as well as the Bobblehead - Lockpick behind them. There is also a workbench in the room with some miscellaneous supplies. The raider respawns after 72 game-hours.[1]

Bethesda ruins appears only in Fallout 3.

This location is a reference to the town of Bethesda, Maryland, the location of the original headquarters of Bethesda Softworks, the producers of Fallout 3. 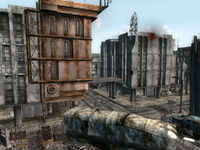 The East and West offices

Sniper between east and west offices

Don't fall through this hole!

West office turret control and a Big Book of Science

Small mine field
Add an image to this gallery

Retrieved from "https://fallout.fandom.com/wiki/Bethesda_ruins?oldid=2687240"
Community content is available under CC-BY-SA unless otherwise noted.