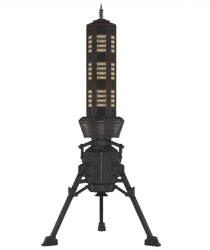 The beta wave emitter is a constructible item that was added to Fallout 4 by the Wasteland Workshop add-on.

Beta wave emitters capable of pacifying normally hostile wasteland creatures and animals captured in cages. Any released creature under the influence of an active emitter will refrain from attacking the Sole Survivor, their companions, and any resident settlers, however they can still occasionally attack other tamed creatures that are not of their own species. Any survivors will then prowl the area and defend it against outside aggressors, adding a race-specific value to the settlement's defense rating without taking up a settler slot. The creatures can therefore be used as a mobile defense force of varying power.

It is important to note that hosting captured non-domesticated creatures of any kind in a settlement will make that settlement the target of regular attacks by other members of the captured species or faction.

A beta wave emitter requires 1 unit of power to work, and is effective throughout the settlement in which it was built.

These numbers are independent from the respective creatures' subtypes; a mythic deathclaw adds the same value to a settlement's defense rating as a standard deathclaw, but will of course be much more powerful in actual combat.

Note that these values' comparability to those of turrets is somewhat debatable. A heavy laser turret for instance provides a defense rating of 12 but will have serious trouble with taking down most mid to high-level attackers on its own, especially during the later game stages. A powerful levelled deathclaw variant on the other hand can wipe out an entire raiding party of the same level single-handedly in no time despite boasting a lower defense rating than the turret. Other predator species might not entirely play in the same league as deathclaws but can devastate groups of hostiles regardless - a lone Deathskull Radscorpion or Dusky Yao Guai is more than capable of holding its own against anything short of roaming deathclaw packs. Even some feral ghouls can prove themselves a nasty roadblock for many would-be attackers.

Conversely, creatures like mutant hounds and even most mirelurks usually won't make it very far despite their good ratings, which is somewhat irritating in the case of the latter considering how difficult it can be for the player to shoot down a charging mirelurk.

Retrieved from "https://fallout.fandom.com/wiki/Beta_wave_emitter?oldid=3341592"
Community content is available under CC-BY-SA unless otherwise noted.