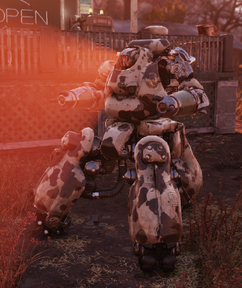 “Exhalation of air through nostrils.”— Bessie

Bessie is a sentry bot belonging to Duchess in Appalachia in 2103.

Following its retirement by the military, Bessie was acquired by Duchess as a bargain due to its integrated weapons being removed, sporting a pair of Protectron hands where its multi-barreled machine guns normally are. She used it as a 'pack ox-forklift hybrid' to haul the materials and supplies she would use to set up the Wayward.[1] Later, Sol gave it a cow-like paint job and voice.[2]

As of 2103, Bessie resides in the brahmin pen next to the Wayward. With its synthesized voice, it makes cow-like sounds and occasionally describes cow-like sound effects.

Bessie appears only in Fallout 76, introduced in the Wastelanders update.

Retrieved from "https://fallout.fandom.com/wiki/Bessie_(Wastelanders)?oldid=3468336"
Community content is available under CC-BY-SA unless otherwise noted.