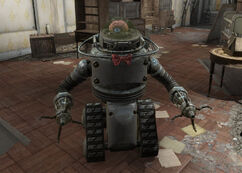 Doctor Bert Riggs is a scientist[2] and former lead developer for General Atomics International, now a robobrain in Vault 118 in 2287.

Bert Riggs was a lead developer of the robobrain for General Atomics International and at some point before the Great War[3] he married Julianna Riggs, a wealthy financial advisor.[4] She a critical and harsh person, was very good with their finances and was able to take charge of situations, which allowed Bert to focus on his classified[1] research.[5]

They were a wealthy family and one of the best connected in Boston. Sometime before 2077, Julianna met Ezra Parker, a business tycoon who wanted to build a vault inside his hotel.[6] Bert and Julianna became the majority investors in the hotel vault,[4] while the vault was under construction, she and Bert moved all of their belongings from their mansion into Vault 118.[7]

When the Riggs arrived at the vault, Bert used the school room at the vault as his laboratory and continued to work at robobrains in there. After some time and discussion with other dwellers, he decided that the best way to survive was to become robobrains themselves, everyone intrigued, agreed and all the guests became robobrains.[8][9]

A few days prior to "Ezra's death" Julianna found something about the finances in the overseer's office. Although she tried to tell Bert he wasn't listening, his head in his research.[10] Because of this Parker would have that section locked claiming it was dangerous.[11]

After Ezra's death, Bert noticed some changes in his wife. She was usually harsh but now she was kind and nice to him; she also started forgetting the names of their cats and said she was getting ill all the time.[12] He does not want to admit to the thoughts he has that it was actually his wife that was murdered,[13][14] willing to go along with the ruse "sickness" as a "glitch in the neurochemical regulator that were supposedly introduced by the voice modulator interface."[15][16] With some persuasion, Bert can admit to the Sole Survivor he does not believe that this person is his wife,[17][18] and after some investigation this is discovered to be true. Ezra had taken Julianna's identity after he killed her in an argument over his embezzlement.

Bert Riggs appears only in the Fallout 4 add-on Far Harbor.

Retrieved from "https://fallout.fandom.com/wiki/Bert_Riggs?oldid=3305564"
Community content is available under CC-BY-SA unless otherwise noted.