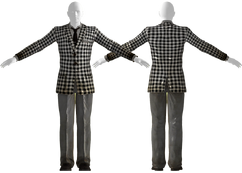 Benny's suit is a unique piece of clothing in Fallout: New Vegas that also appears in the graphic novel All Roads.

Benny's suit is a black and white buffalo plaid suit jacket worn with light grey dress pants, white dress shirt, and black tie. It adds an additional five points to Speech and Barter and can be repaired with any type of businesswear.

The suit is worn by Benny.

Benny's suit worn by a female