Operation: Anchorage!
Paving the Way
The Guns of Anchorage

Caucasian
“Get out of my country, Commie!”

Sgt. Benjamin "Benji" Montgomery is a soldier fighting the invading Chinese during Operation: Anchorage. He is one of the soldiers encountered in the Anchorage Reclamation simulation.[1]

Montgomery has been a field soldier fighting on the Anchorage front line for several tours, part of General Chase's army.[Non-canon 1] He is assigned as the Lone Wanderer's active party member and soon becomes a confidante, fighting alongside them during many crucial stages in the Battle of Anchorage.

At the beginning of the simulation, Benjamin carries a wasteland-version of the silenced 10mm pistol, while the player character carries a pre-War variant.

Benjamin Montgomery appears only in the Fallout 3 add-on Operation: Anchorage. 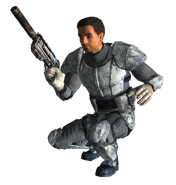