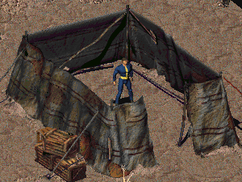 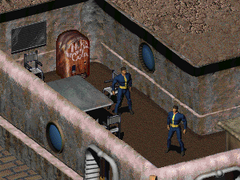 “Hello there. My name's Ben. Ben Wade. I'm in charge of trade caravans between Redding and Vault City. I can usually use an extra guard or two. We leave town on the 1st of every month. If you want to sign on, make sure you're here then.”

Ben Wade is a surprisingly brave citizen who does not hide behind laser cannons and armored guards within Vault City, but is out in the wastes, overseeing caravans to and from Redding, trading medical supplies for valuable gold ore.

Golden Trail: His caravan leaves Redding on the 1st of every month and heads to Vault City. The Chosen One can be enlisted by him as a guard for up to $1200 in cash.

Ben Wade appears only in Fallout 2.

Retrieved from "https://fallout.fandom.com/wiki/Ben_Wade?oldid=3405350"
Community content is available under CC-BY-SA unless otherwise noted.