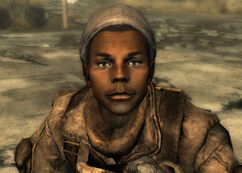 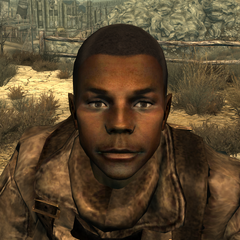 Ben Canning is a water beggar found at random locations in the Capital Wasteland in the year 2277.

Canning isn't like those other lay-abouts, waiting on the threshold of a settlement for a hand-out. No, Canning is an adventurer who is almost completely unprepared for wasteland exploring, a fact he proves when he rushes up to you. He is friendly though, for a beggar.[1]

Ben Canning appears in a random encounter. Upon meeting, the Lone Wanderer may choose to give him water or let him die. Unlike the water beggars found outside Megaton, Tenpenny Tower, and Rivet City who will only accept purified water, Ben will also accept dirty water. However, he will not accept Aqua Pura, Aqua Cura, or holy water.

If one has both purified and dirty water in their inventory, the game will prioritize the latter over the former. If given water, he proceeds to drink it repeatedly; when activated, he apologetically tells the character that he's not up to traveling yet. Standing after a minute or two, he simply says "Good to see you again, friend!" If one refuses to give him water, he will ask them to shoot him in the head, because he is out of ammunition, or else he would do it himself. If one grants this request, they will receive negative Karma.

Ben Canning appears only in Fallout 3.

Retrieved from "https://fallout.fandom.com/wiki/Ben_Canning?oldid=3202079"
Community content is available under CC-BY-SA unless otherwise noted.