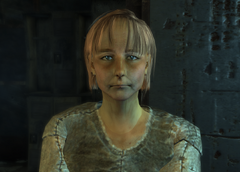 Belle without her head wrap

“No, I can't fucking well share one! What sort of moron are you? But, fine, if it'll get you out of my face: go down to Pinkerton's shed in the broken-off bow of the ship. If he decides to give you a history lesson, it's no business of mine. Now get the hell out of my bar.”

Belle Bonny, 55, spends all her time in the bar, which is open around the clock, seven days a week. She sleeps for a few hours at night, and Brock watches the bar when she does, but then she returns to work. She is considered to be riffraff, even by the Hangar Deck crowd (everybody needs someone to look down on). She is a crotchety old woman, salty as hell. She won't take crap from anyone. There is a rumor floating around that she stared down Sister. It's true, even Garza is reluctant to tangle with her.[1]

The acerbic proprietor of the Muddy Rudder, Rivet City's "working man's" bar, Belle Bonny is known for her sharp tongue, unswerving dedication to making money, and unceasing supply of alcohol. Gossip around Rivet City speaks volumes about the Muddy Rudder and, by extension, its owner. Even though she has her faithful bouncer, Brock, brawls are a common occurrence in Bonny's establishment, and, rather than pay for new furniture, Bonny typically scrounges replacements from unused portions of the ship. Bonny rarely ventures out of her bar, however, and keeps longer hours than most other establishments in Rivet City, including her closest competition, the Weatherly Hotel. Only those about at the very small hours of the morning will find the bar closed.

Nothing is known regarding Bonny's past, and the tight-lipped bartender is unlikely to let on any secrets.

Belle Bonny appears only in Fallout 3.

Retrieved from "https://fallout.fandom.com/wiki/Belle_Bonny?oldid=3244157"
Community content is available under CC-BY-SA unless otherwise noted.