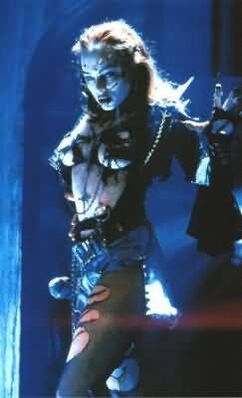 Die Hard
In Your Face!

Belle is a born ghoul from the Reservation.

Belle was the last ghoul to be successfully conceived and birthed on the Reservation.[1]

Belle is unusually attractive for a ghoul. In fact, if it weren't for her lesions and symmetrically exposed bone, she would look like a pretty, though pale, human female. Even her hair is fairly full and long and thanks to the born ghoul’s ability to rapidly grow into adulthood within a month, she is also very curvy and fit looking. Since Belle is such an interesting success in the procreation experiment, Dr. Sebastian keeps a close eye on Belle and interacts with her very frequently. However, Belle does roam around the town on a daily basis, causing the other male ghouls to almost lose their jaws as she walks by.[2]

Belle is very approachable and will freely interact with the Prisoner. If the Prisoner lacks a high Charisma (< 4), she will aggressively flirt with him opening up opportunities for a sexual encounter with her. Since Belle's quarters are on Sub-Level 3, and since Willem restricts all access to only those he visually approves, Belle will lead the Prisoner to one of the rooms on Sub-Level 1 (the occupants of the sleeping quarters freely give up their room for a born ghoul – it's like a god to them). A particularly worthy performance by the Prisoner (Endurance > 7) will get Belle to become completely enamored with him and garner more information about Sub-Level 3. A major side effect of such an encounter will be that Belle becomes pregnant.[2] In the event of this, it was considered by developers that an ending slide for the Reservation would include a "ghoul junior."[3]

Belle was to appear in Van Buren, the canceled Fallout 3 by Black Isle Studios.

The image used in the design document is a publicity still taken for the 1993 movie Return of the Living Dead III of actress Melinda Clarke.[4][5]

Retrieved from "https://fallout.fandom.com/wiki/Belle?oldid=3334371"
Community content is available under CC-BY-SA unless otherwise noted.