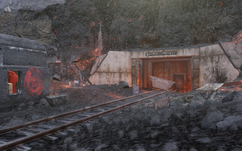 Belching Betty is a location in the Ash Heap region of Appalachia in 2102.

An old Garrahan Mining Co. mine, shaft Beatrice was sealed following an underground fire that could not be extinguished by conventional means. Following the Great War and emergence of the scorched, it was turned into a containment area and later the final test site for the Fire Breathers, where they proved whether they had the skills and tenacity needed of the Responders' most elite unit. The bodies of a group of Fire Breather trainees can be found in the mine: Andrew Rhodes, Sylvester Tate, Rita Wilcox, Timothy Wolfe, and Maxine Ballard.

The following crafting stations can be found at this location:

Power armor
Add an image to this gallery
Retrieved from "https://fallout.fandom.com/wiki/Belching_Betty?oldid=3086634"
Community content is available under CC-BY-SA unless otherwise noted.