Into the Fire
Lost and Found
Lucky Strike

Belching Betty, otherwise known as Garrahan Mineshaft Beatrice or simply Mine Shaft Beatrice,[Non-canon 1] is a location in the Ash Heap region of Appalachia.

Belching Betty is an old Garrahan Mining Company mine shaft. It was sealed following an underground fire that could not be extinguished by conventional means. Following the Great War and the emergence of the Scorched, it was turned into a containment area and later the final test site for the Fire Breathers, where they proved whether they had the skills and tenacity needed of the Responders' most elite unit.

The mining shaft is relatively straightforward. The entrance to the mine leads into a staging area that has an office space, storage, and a washroom. There are several desks and cabinets in the office space and a couple open crates with a sack can be found spread about. The staging area also contains bobby pins on top of the office desk and a terminal that opens the security gate into the mine. A warning can be found on the terminal, stating that the mine is closed and contains hostiles. Face protection (gas mask, Fire Breather helmet, power armor helmet, etc.) is necessary for surviving in the toxic environment of the mine. The ground is also rife with burning fissures, so caution is advised.

The start of the mine tracks is found here, and they can be followed to the end of the mine. Every part of the mine after this section contains several enemies and toxic fumes. When following the tracks, the next section is the main general processing area. Workstation shacks on top of some locker rooms can be found here, as well as wrecked machines and tracks. This section is where the bodies of Fire Breathers trainees Timothy Wolfe, Sylvester Tate, and Andrew Rhodes rest.

The tracks then split into two paths, either one will eventually lead to the final section of the mine. Following the tracks to the left will lead to large passageways with mining equipment and conveyor belts. Following the tracks to the right will lead to another, smaller processing area, likely used to load cargo onto the carts. Near the northeast side of this room is a fenced area, along with a staircase. This staircase can lead up to a small storage area or down to the large mining area with the emergency beacon, which is heavily guarded by Scorched. When descending the staircase to the mining area, it leads into a fenced-in storage platform, with a staircase to the main area at the end of the fenced-in portion.

This mining area consists of one sizable workstation shack, an industrial supply elevator, massive old generators, and a fenced fusion generator room. The beacon is in the center of the room on a raised platform between the two old generators. The bodies of Rita Wilcox and Maxine Ballard can be found near the button for the emergency signal.

The following crafting stations can be found at this location: 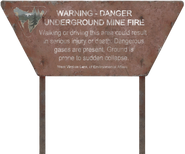