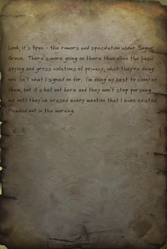 Being followed is a cut paper note in Fallout 76.

Look, it's true - the rumors and speculation about Sugar Grove. There's more going on there than even the basic spying and gross violations of privacy; what they're doing now isn't what I signed on for. I'm doing my best to counter them, but it's hell out here and they won't stop pursuing me until they've erased every mention that I even existed. Headed out in the morning.

The note was previously located northwest of Harpers Ferry railway bridge, in a cooler on some barrels on the river bank, however it was removed during one of the updates.

Retrieved from "https://fallout.fandom.com/wiki/Being_followed?oldid=3169781"
Community content is available under CC-BY-SA unless otherwise noted.