The behemoth is the largest and most dangerous of the robots used by the Calculator, the mad cyborg from Vault 0, in the Midwest in the year of 2197.

This six-legged walker is similar to the quadrupedal pacification robot, but larger and equipped with four machine guns. Each behemoth has in excess of 1000 Hit Points and very strong armor. The minigun that the robot uses can easily kill a character on a critical hit, but has relatively short range. The weapon uses .50 caliber rounds and any ammunition the robot does not use can be scavenged from the corpse.

Behemoth robots normally move at a plodding pace when on patrol or in transit, but if they spot an enemy they can charge fairly quickly, and will continue to follow them.

Behemoth robots appear in Fallout Tactics. They were also destined to appear based on the Tibbets Prison design document/2 for the canceled Van Buren. 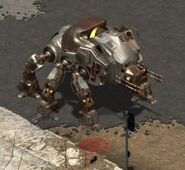 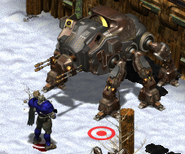 Behemoths being disabled in Fallout Tactics ending
Add an image to this gallery
Retrieved from "https://fallout.fandom.com/wiki/Behemoth_(robot)?oldid=3133492"
Community content is available under CC-BY-SA unless otherwise noted.