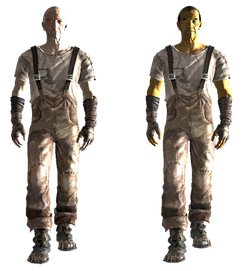 The beggar is a cut non-player character still present in the game's files of Fallout: New Vegas.

There are three beggars present in the G.E.C.K., all old-aged. One has gray hair. The other two have a similar appearance to each other, although they are of different race (Caucasian/Hispanic).

The beggar was added during the development stages of Fallout: New Vegas, but was cut from the final retail release of the game.

Retrieved from "https://fallout.fandom.com/wiki/Beggar_(Fallout:_New_Vegas)?oldid=2892140"
Community content is available under CC-BY-SA unless otherwise noted.