Beer is one of the varieties of alcohol found in the wasteland.

One of the oldest drinks known to man, beer is a beverage made from a variety of cereal grains, such as barley, wheat, maize, and rice. The fermentation of starch sugars produces the alcoholic content in beer, as well as natural carbonation. Beer can be produced in a large number of varieties and has been a staple of human culture since its very inception, with the oldest archeological evidence dating back to 13,000 BCE.[1]

Post-War America was no exception and the nuclear holocaust was only a temporary setback for the brewers and beer-drinkers of the wasteland. Even after the war, new beers are being produced with new ingredients found in the post-War landscape.

Beer is one of the most ubiquitous alcoholic drinks in the wasteland. Although in the first three games in the series alcohol did nothing but decrease Perception, from Fallout 3 onwards, all alcoholic drinks became minor boosters, increasing Strength and Charisma at the expense of Intelligence.

Ales are some of the oldest types of beer and tend to feature a full-bodied, sweet taste with fruity flavors and aromas, due to the esters produced by the process. Ales are brewed using warm fermentation, over 15 °C (59 °F). The natural fermentation processes cause the batch to foam at the surface, creating a barm. This distinct feature caused beers obtained this way to be called top-fermenting. Brands of ale include:

New River Red
Add an image to this gallery

A dark ale with numerous variations, stouts are typically made with top-fermenting yeast. The common, dry variant of stout features a rich taste, frequently with chocolate or coffee notes. Like ales, stouts are brewed using warm fermentation, over 15 °C (59 °F). The natural fermentation processes cause the batch to foam at the surface, creating a barm. This distinct feature caused beers obtained this way to be called top-fermenting. Brands of stouts include:

Blackwater Brew
Add an image to this gallery

Lager is a type of beer conditioned after brewing in low temperatures, and typically brewed with the use of a bottom-fermenting yeast capable of fermenting at a low temperature, around 10 °C (50 °F). Lagers are a popular brew type, and the type of malt used and the initial fermentation method will affect the appearance and taste of the end product. However, lagers tend to be milder, smoother, and more refreshing than other types of beers, thanks to the aging process. Brands of lagers include: 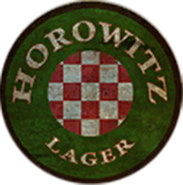 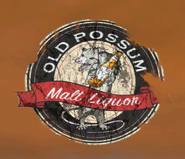 Old Possum
Add an image to this gallery

Pilsners are a variety of pale lager, taking their name from the Czech Pilsen, where the flirt beer of this type was brewed in 1842. They are distinguished by the use of pale malts, soft water, and lager-style aging to create a clear, golden beer with a crisp flavor that features a hop note in the taste. Brands of pilsners include:

Pickaxe pilsner
Add an image to this gallery

Wheat beers are a variant of beer distinguished by its high proportion of wheat relative to the amount of malted barley used in a batch. The traditional recipes originate in Germany and the Netherlands, where this type of beer is known as Weißbier and Witbier respectively. Brands of wheat beers include:

Home-brewed beer is a common type of beer encountered across the wasteland, frequently repackaged into glass bottles original, brand-name beers came in.[3]

Brewed with the use of irradiated water, Gamma Gulp beer is a beverage brewed by ghouls specifically for ghouls. The combination of rads and alcohol gives it a pleasant kick and makes it the drink of choice for citizens of ghoul-majority towns, like Gecko.[4][5][6]

Several varieties of beer exist in the wasteland, of an unknown style. These are:

Many beer brands are featured in Fallout: New Vegas, on the taps found throughout the bars of the Mojave. Some are references to developers, such as Dirty Fenster, which is a nod to Eric Fenstermaker.

Retrieved from "https://fallout.fandom.com/wiki/Beer?oldid=3230016"
Community content is available under CC-BY-SA unless otherwise noted.