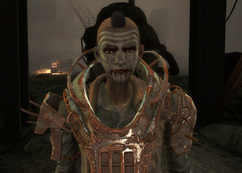 Bedlam is a the leader of the raiders in Dunwich Borers in 2287.

Bedlam was sent by Slag, the leader of the Forged, to the Dunwich Borers marble quarry when the Forged's raider affiliate workers stopped sending shipments of scrap metal to their base at the Saugus Ironworks. When she arrived she learned that the reason for the work stoppage was that the workers were frightened by their experiences near the bottom of the mine. Some even went insane from their encounters, like Hugo who set up his own camp in the storage/loading area.[1] Believing that what the work crew was experiencing was them just being frightened by some feral ghouls, she immediately got them back to work.[2][3] They were able to get another two shipments out on time, but when the crew they sent to clear out the ferals failed to return the work stopped. Needing to make his quota, Bedlam herself would enter the deepest part of the mine. To end the feral threat and get her workers back on track.[4] Whatever she experienced in the mine caused her to lose her sanity.[5]

Bedlam appears only in Fallout 4.

Retrieved from "https://fallout.fandom.com/wiki/Bedlam?oldid=3363299"
Community content is available under CC-BY-SA unless otherwise noted.