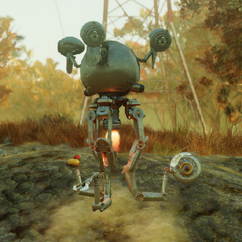 Beckham is a Mister Handy operating near Braxson's Quality Medical Supplies in Appalachia.

Beckham was purchased by Edna, the proprietor of the Berkeley Springs Spa, in Berkeley Springs. The salesman assured her that it would do the work of two employees, she hoped it would, otherwise she would rather have spent the cash on a new sauna for the spa. On February 22, 2075 Edna received the new Mister Handy she purchased to help around the Spa. When she turned it on it stated that its name was "Z43126." She decided to rename it "Beckham" after the dog she owned in her teenage years.[1] Everything was going well until October 6th, 2075, when Beckham accidentally used a loofah instead of the requested pumice-scrub for a client. The client enraged said that they were "unhappy with the level of service they were receiving," despite everything else with their spa visit going perfectly.[2] By November 18, 2075, the honey treatments became so increasingly popular that Edna added it to the menu. Originally, she tried ordering jars of honey, but it proved too expensive. She then tried sending Beckham to collect honey from a few nearby apiaries looking for a reliable and cheap source, but the local apiaries were also too expensive for her. Finally, she decided to send Beckham out to look for natural hives in the area. This plan worked and Edna got all the honey she needed cheaply and without risking an organic employee to bee stings. [3]

On May 10, 2076, Beckham knocked over a tray of lotions, in response Edna called the company she purchased it from. They gave her ideas on how to calibrate its hover jet and modify its sensors. They also told her how to modify the robot further, particularly its expressed opinions and reactions. She decided to test this by making Beckham fearful of bees so that she could watch it squirm the next time it had to collect honey, which she found entertaining.[4] For the next twenty seven years, Beckham was stuck in that routine in the Mire, until it was discovered and helped by the Vault Dwellers of Vault 76.

Beckham appears only in Fallout 76.

Retrieved from "https://fallout.fandom.com/wiki/Beckham?oldid=3399518"
Community content is available under CC-BY-SA unless otherwise noted.