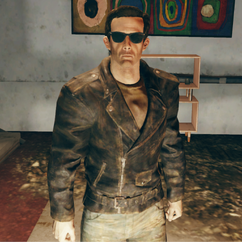 Beckett is a former member of the Blood Eagles and possible ally in Appalachia in 2103.

As a child growing up in Maryland, Beckett did not have much. His father died when he was very young and he never knew his mother, leaving just Beckett to take of his kid brother, Frankie.[1] One day, while playing in a destroyed factory, they were ambushed by a pack of wild dogs. Frankie was bitten and contracted rabies. Beckett stayed by his side, and nursed him back to health, even stealing rabies medication just to keep him alive. From that day on, they made a vow to stick with each other forever, no matter the situation.[2]

Realizing that they were actually good at stealing, they worked together as a pair in order to commit small-time crime. They usually stuck to theft, but Frankie had a raging bloodlust and wanted more. Beckett said no. When Beckett finally joined a real gang, he left Frankie behind for his own good.

Beckett started out in Hopkins' Hooligans, a tiny operation of raiders, and the going was good. There was everything a raider could want until Hopkins got himself killed, and the gang fell apart. Beckett wandered for a bit, until he fell into Edwin's gang, a larger group, making bigger scores.[3] Beckett thrived with this new group. Edwin was crazy, but he was a good man, and those who served under him were happy. With this pack, Beckett even made his trek into Appalachia, bringing Frankie with him.

He left Frankie with the Settlers in Foundation and continued to run with Edwin's gang, racking up loot left, right and center. However, when he became hooked on chems, it all came crashing down.

The Blood Eagles were the ones supplying local gangs with chems and were monitoring to see just who got addicted. Those who did were given special, highly addictive spiked chems, and forced to work for the Eagles in order to get more of it. Beckett was hooked and got roped into the gang, committing various acts, such as the murder of a Settler family, all in his drugged-out state of mind. Eventually, Beckett was able to gain clarity and sobriety on what had happened to him, heavily regretting his actions under the influence of drugs, and became convinced to leave the Eagles and hopefully eventually cause their downfall.

He continued to fight them and their control until he eventually pushed too hard. He was captured by the Eagles and imprisoned at the Rollins labor camp, soon to be tortured and executed.

Luckily, a radio transmission about his impending execution was picked up on the Pip-Boy 2000 Mark VI radio of a Vault Dweller from Vault 76, and they traveled to the Rollins labor camp to rescue Beckett from his impending death. Grateful to the rescue, Beckett asks the Vault Dweller to retrieve his belongings from another Blood Eagles camp at The Sludge Works and set his personal bar up at their C.A.M.P. so he can find them. Once the bar is up and running, Beckett reaches the C.A.M.P. and asks the Vault Dweller to aid him in taking vengeance against the Blood Eagles with disrupting their operations and taking down their triad of leaders: The Blood, The Eye, and The Claw.

Beckett appears only in Fallout 76, introduced in the Wastelanders update.

Beckett at his bar
Add a photo to this gallery

Retrieved from "https://fallout.fandom.com/wiki/Beckett_(Wastelanders)?oldid=3480672"
Community content is available under CC-BY-SA unless otherwise noted.