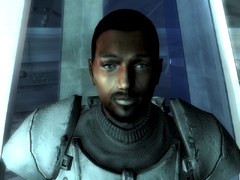 Beckett without his helmet

“Agh...feels like someone rearranged my insides. What happened to us?”— Beckett

Private Beckett is a soldier found in the cryo lab section of Mothership Zeta in 2277.

Part of the 108th Infantry Battalion, Private Beckett was part of Sergeant Daniels' squad and fought alongside Elliott Tercorien when he had to. However, being part of a medical team, Beckett's primary function was to carry stretchered troops to safety, either for evacuation or swift on-site medical attention.[1]

* He receives a Chinese assault rifle from Elliott if he is correctly revived.

Both he and Daniels lose health naturally over time and will not heal themselves, even if somehow given stimpaks; this will eventually lead to their deaths. Additionally, Beckett and Daniels will die immediately upon the destruction of the cryo lab generator as part of a scripted event.

Private Beckett appears only in the Fallout 3 add-on Mothership Zeta.