Beavers are creatures found in Appalachia.

A pre-War animal that had several unique traits such as transparent eyelids, protecting them while swimming underwater as well as sharped teeth, kept sharp by grinding them together.[1][2]

Typically found in the Forest and occasionally the Cranberry Bog, radbeavers[3] are mutated versions of furred pre-War beavers. While maintaining their size, beavers underwent a series of other mutations. The growth of fur has been reduced, revealing wrinkled, fleshy pink skin. The tail and back are covered in jagged spike growths protruding from the body and they have prominent noses and teeth.

Beavers are harmless and will not attack the player character or other creatures. They may flee when approached by hostile creatures. They often appear in small groups of three.

A trio of beavers can potentially appear:

A mounted beaver also appears as a decoration in Appalachia.

Beavers appear only in Fallout 76. 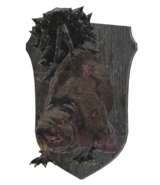