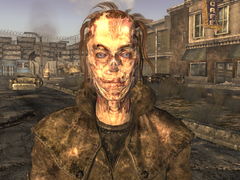 Beatrix without her hat

“Feed a man for free. He'll be back asking for more. Feed a man a bullet. You won't hear from him again.”

Beatrix Russell is a ghoul who works as a guard for the Followers of the Apocalypse. She is found in the Old Mormon Fort in Freeside in the year 2281.

Beatrix Russell is a gun-for-hire, currently employed by the doctors of the Followers of the Apocalypse.[1] In her long life, she's experienced a lot of human nature, and finds that "physical and mental anguish are especially exciting to explore."[2] She enjoys drinking but the Followers won't allow her to drink on the job, so she finds her job at the Old Mormon Fort a bit dull.[3]

Killing her after completing the quest Wang Dang Atomic Tango will still result in Followers of the Apocalypse Infamy.