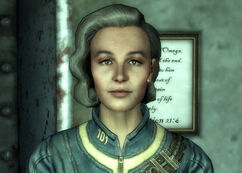 36 (during Growing Up Fast)
45 (during Trouble on the Homefront)

Growing up Fast:
Helps Nobody
Trouble on the Homefront:
Helps Friends and Allies

0001CFBF (Trouble on the Homefront)

Beatrice.txt (Trouble on the Homefront)

“Don't be silly! One poem per birthday, that's my rule! Ha ha. If I gave you two, think how jealous Butch would be, ha ha.”

An eccentric, airheaded dweller of Vault 101, Beatrice often butts into other residents' business, though she vehemently denies that she is ever involved in others' affairs. Beatrice frequently gossips with her married sisters, Mary Kendall and Gloria Mack; she is also best friends with Pepper Gomez, and is romantically interested in Mister Brotch.[1]

Beatrice's hobbies include reading Tarot cards[2] and writing poems. At one point, she attempted to write a poem in commemoration of Vault 101's first overseer on Founder's Day, but she struggled to find words that rhymed with "overseer." Although she claims to never copy her old poems, she ended up re-using her Founder's Day draft for use in one of her later poems.[3] She will give the Lone Wanderer a poem for their tenth birthday party on July 13, 2268.[4]

During the factional crisis in Vault 101, Beatrice died when Andy amputated her entire right leg in an attempt to treat her left big toe, sprained at some point after the chaos caused by the Lone Wanderer's escape.[5]

Growing Up Fast: She will give the Lone Wanderer a poem for their tenth birthday party.

Beatrice Armstrong appears only in Fallout 3.

Beatrice, during Growing Up Fast

Retrieved from "https://fallout.fandom.com/wiki/Beatrice_Armstrong?oldid=3482884"
Community content is available under CC-BY-SA unless otherwise noted.