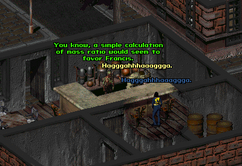 “You think you can take me, eh? All right. You win, you get this power fist. I win, and you're my gimp for a night.”— Francis

Beat Francis at armwrestling is an unmarked quest in Fallout 2. It will not be available if the player confronted Francis after confronting Francis about his note.

Francis, the super mutant at the Broken Hills bar, is searching for someone who can test his strength with a game of armwrestling.

Francis sits in the bar in downtown Broken Hills, near Marcus. When spoken to, he will offer a challenge to the Chosen One: Armwrestling. If the Chosen One can beat Francis, they will receive a "Big Frigger" power fist, a powerful Unarmed weapon for this point in the game. If they don't, they consent to being Francis' gimp (a submissive sex partner) for the night. Francis will only offer the challenge if the player character has at least 2 Intelligence, 8 Strength and be of level 6 or higher.

Beating Francis requires 9 Strength and 9 Endurance (8 Strength and 10 Endurance can work too). However, since the game performs a dice roll, rather than a flat check, there's alway a chance of losing, so saving is recommended. Buffout can be used to inflate the player character's stats to meet the requirements and Eric will actually give one dose as a reward for diverting power to his home, if the player has not beat Francis yet.

If Francis wins, the Chosen One becomes his gimp for the night and will wake up at his house with a ball gag in their inventory. The Tanker vagrants on the PMV Valdez in San Francisco will also reference the night.

Retrieved from "https://fallout.fandom.com/wiki/Beat_Francis_at_armwrestling?oldid=3449134"
Community content is available under CC-BY-SA unless otherwise noted.