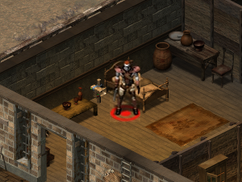 Beastlord commander was one of the three Beastlord leaders (Duff being the second, and the third was an unnamed woman in the power station) who were in charge of the attack on Quincy in 2197.

Beastlord commander resided in Hillary Eastwood's house and kept the key to her room. He was one of the first to be killed by the Brotherhood of Steel squad led by the Warrior. While being one of the Beastlords he looked quite different from his tribal comrades, being much more "civilized". In fact, he appears more like a raider.

The Beastlord commander appears only in Fallout Tactics

Retrieved from "https://fallout.fandom.com/wiki/Beastlord_commander?oldid=3298237"
Community content is available under CC-BY-SA unless otherwise noted.