HairGhoul01
“They bear false versions of Legate Lanius' mask, the one Caesar fashioned for him. Thought it was an insult at first.... know better now. It's shaped from Divide metal, not with care and strength, but with hate. Keeps them anchored. Crude, effective - like the blades they carry, distant mirrors of their Legate. A symbol they can hold on to - while the Divide tears at them.”— Ulysses about the masks worn by the marked men leaders

Beast is the second of four unique marked men encountered in the Divide in 2281.

Beast is a marauder residing in a small camp east of the High Road entrance. His health and combat skills are higher than those of a normal marked man and are on par with those of a companion. His armor and mask are a crude imitation of Legate Lanius' armor and he wields a shoulder mounted machine gun. 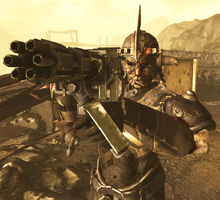